Taking inspiration from artists like Wilco and The National, The Gertrudes knit together a sound like an old-time saloon party travelling through deep space. Emergency To Emergency follows three full length albums by The Gertrudes who have toured cross-country including shows like Vancouver Folk Festival, Pop Montreal, and shared the stage with artists such as Sarah Harmer, Calexico, and Ricky Skaggs. All songs are based on historic Irish and North American fiddle tunes that help provide some perspective on how our current experiences of plague and economic uncertainty are not that unprecedented after all.

The Gertrudes were formed in Kingston, Ontario in 2008.

The band’s name was a reference to a founding member’s grandmother, who the family believes to be reincarnated in his sister of the same name. Musicians performing with the band varied from one show to the next, but core members included Greg Tilson (guitar, vocals), Annie Clifford (banjo, vocals), Lucas Huang (ukulele, percussion), Jason Erb (piano), Matt Rogalsky (guitar, mandolin), Josh Lyon (trumpet, piano, accordion), Pete Bowers (percussion), Chris Trimmer (theremin), and Pim van Geffen (trombone), with Amanda Balsys (violin, vocals) joining in time for their first full-length release, Dawn Time Riot in 2010. PS I Love You were guest musicians on one track of Dawn Time Riot. Exclaim! called the album “a meticulously crafted spectrum of modern folk sound”.

The Gertrudes bring together a versatile collective of musicians to create a unique and experimental folkestra.

Their single All the Dollar Bills Sing Hallelujah debuted at the top of the CBC Radio 3 R3-30 chart in the summer of 2013. They also placed multiple albums on the !earshot campus and community music charts. In 2012 they played during the finale of the Vancouver Folk Music Festival alongside the Tao Rodriguez-Seeger Band. 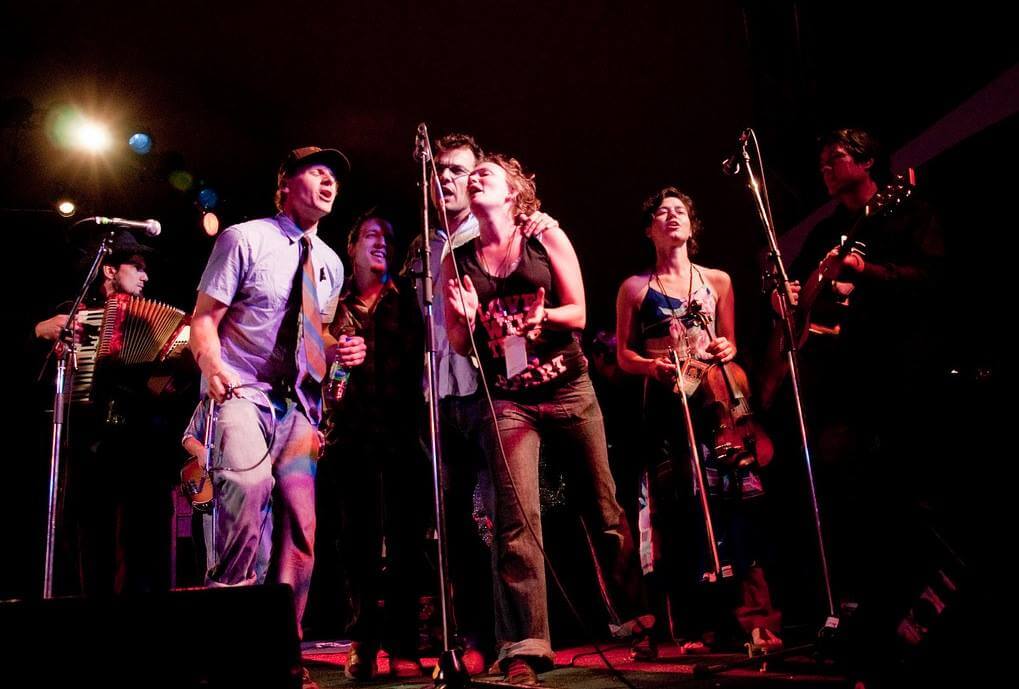 After their period of regularly performing and recording, the band has occasionally reassembled to contribute to community and activist projects, including providing the score for a 2014 documentary about the closure of prison farms across Canada, releasing a song critical of first Prime Minister John A. Macdonald’s racist and expansionist policies in counterpoint to celebrations on his 200th birthday in 2015, and in 2016 releasing a song and music video to protest a plan to extend a road through Douglas Fluhrer Park in Kingston.

The Gertrudes bring together a versatile collective of musicians to create a unique and experimental folkestra. They have produced four full-length albums, two EPS, participated in numerous festivals (notably Pop Montreal, Vancouver Folk Festival, Halifax Pop Explosion), and shared the stage with artists such Sarah Harmer, Calexico, and Ricky Skaggs. Recordings and performances have brought together a manic collaboration of choirs, symphonies, and over 100 local musicians.