Call him “country” or “outlaw” but Kingston-based entertainer Clem Chesterfield’s self described definition is, “cosmic cowboy meets alt-country… in a fancy sequinned suit”.

Clem Chesterfield is the alter ego of singer/songwriter Tim Sheffield who began his music career in the early 80’s in rock and blues based bands. He would have some indie success with funk rock band Lounge Act later in the 90’s creating two CDs and touring Canada and Europe.

In 2016 Sheffield found himself with a group of original songs that he could only describe as ”country in nature”. He knew the perfect persona to deliver those songs, his old drinking buddy, Clem Chesterfield. 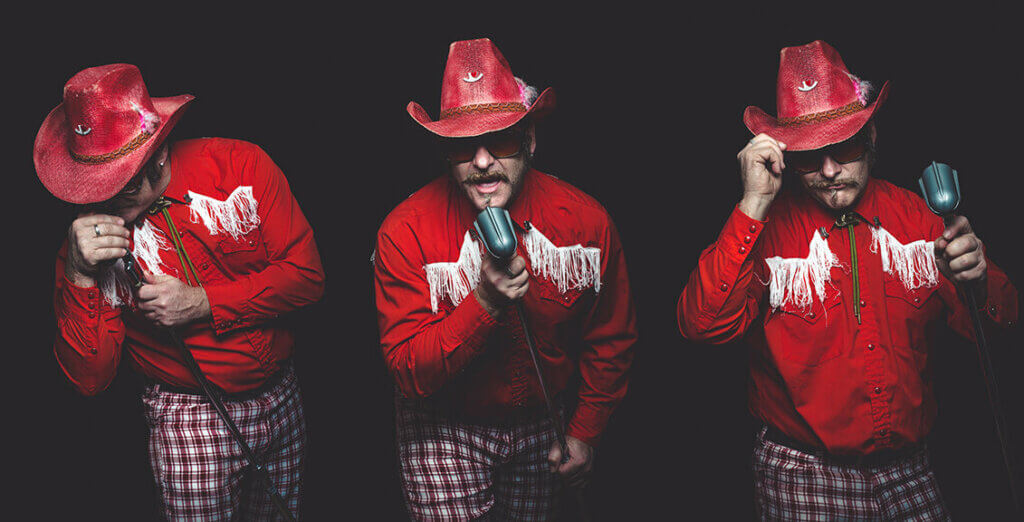 The songs were crafted into 2017’s debut release, The Chronicles Of Clem Chesterfield. Clem on vocals and acoustic guitar was joined by Jason Euringer (Sarah Harmer Band) on upright acoustic bass and Burke Carroll (George Fox, Murray McLauchlan, Ian Tyson) on pedal steel and dobro guitars. Together they presented these new songs with a fresh take on the Classic Country sound which includes an essential Everyman viewpoint identifying as pure Canadiana.

A new album titled Of Lures & Love… with The LA-Z Boy Recliners, is on the way in the spring of 2021. Clem Chesterfield has become known as the Inclusive Cowboy and credits his durability and longevity in the music industry to maintaining and sustaining a strong “family” unit, which has been a central theme throughout his career.

“Family has three components as it pertains to my music career.

First, there are the people I am related to, then the ones I choose to love, and ultimately the ones that become friends and fans.

Second are the people I like to collaborate with musically. This sub family, The LA-Z Boy Recliners band, has a shared vision of how we want to present ourselves and how we want to sound. We have common goals of creating original music that challenges the listener to engage with us, putting themselves in the story, joining our family.

Thirdly, is the team required to be successful in the music industry. Joining up and recording with Wolfe Island Records producer and owner, Hugh Christopher Brown, has felt like I have found a home base that understands my vision and goals for creating and delivering high quality original music. Wolfe Island Records has distribution with Continental Record Services of Holland. The team also includes Jameson Wood, Wood Creative Group (Website Design and Social Media Marketing) and Mavis Harris, Nice Marmot PR (Publicist and PR Manager).

After a lifetime in the music industry I’ve finally discovered the family required to support and build my Outlaw Dreams”.

Clem is ready to saddle up and ride that dusty trail to Alt-Country success.

Come On Along Ya’ll!