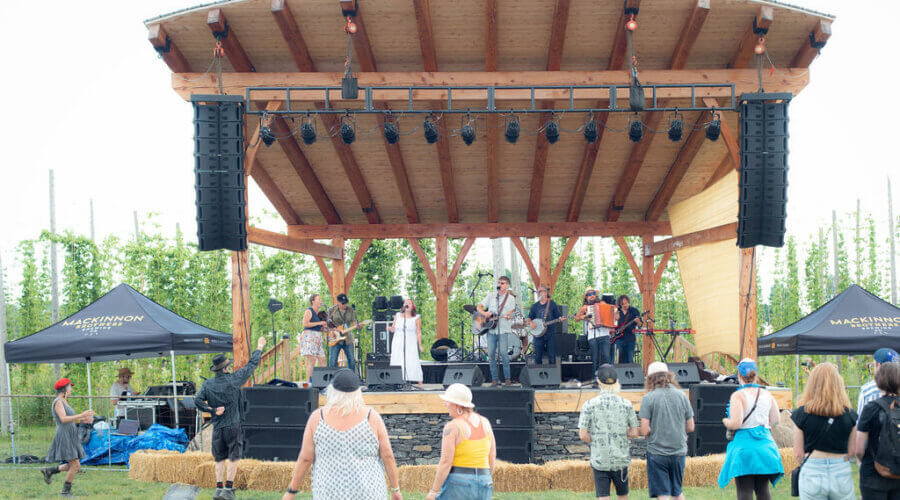 Back to the Farm filled with local flare

On Sunday, August 21, 2022, several thousand people from across the greater Kingston region made what’s become an annual pilgrimage to the Back to the Farm craft beer and music festival at MacKinnon Brothers Brewing Company. For the first full scale version of the festival since 2019, the craft brewery just west of Kingston organized a jam-packed day of local food, drinks and live music, featuring close to a dozen different acts. While bands like Born Ruffians and The Strumbellas—both stalwarts of the Canadian indie scene for over a decade—were featured as the festival’s big headliners, the real spotlight shone on the multitude of local musical performers who galvanized festivalgoers over eight hours toward the final acts of the event. 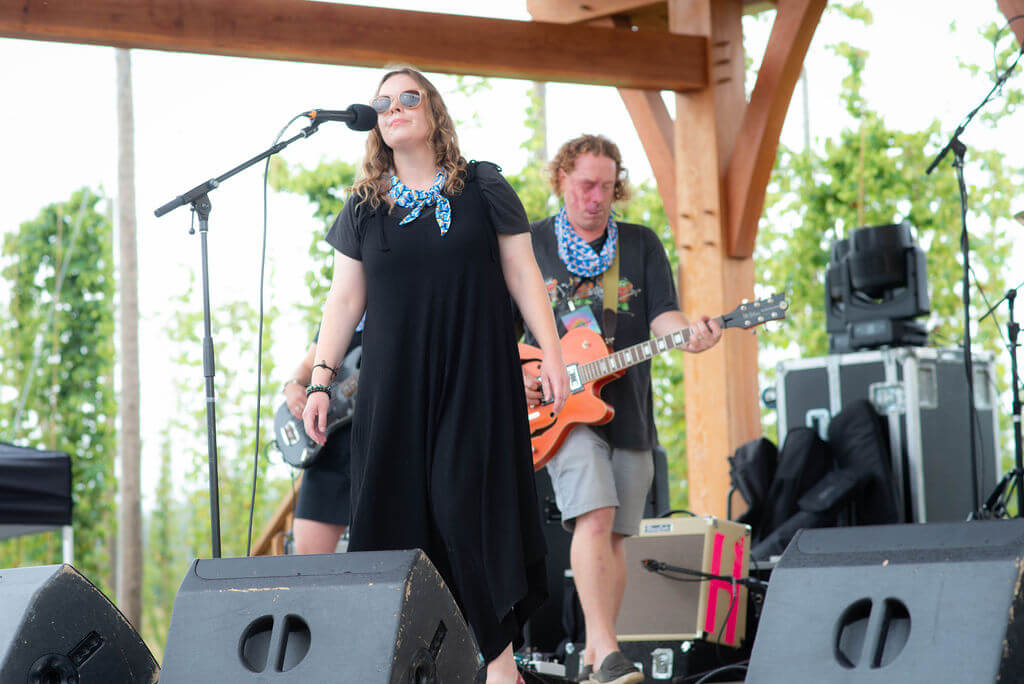 A notable and early surprise was the debut performance by Kingston’s The Apricots. The mysterious, neckerchief-wearing six-piece outfit was revealed as an all-star band led by singer-songwriter Moira Demorest (formerly of PELT) and Marc Garniss (of I Hate Sally). They warmed the arriving crowd with a set of jangly indie rock ditties about poor pandemic dietary habits, and at least one of Moira’s solo originals, “Car Ride.” When asked, band members seemed vague but warm about the prospect of future performances. 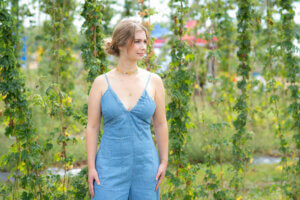 As attendees settled, Kingston’s award-winning Julia Finnegan performed her blend of original folk and Indie rock. “I was super nervous, but it was a blast,” remarked Finnegan, who has performed countless gigs in the region over the last year. During her performance, Finnegan debuted a few new songs, with the help of a full band. “I don’t typically play with a band but working with [them] has been… helping kind of inform how I play new songs, which has been really fun.” As for what the Kingstonian has lined up next, Finnegan mentioned that she will be back to play the MacKinnon Brothers brewery next weekend, before taking some time over the fall to write and work on new music.

The afternoon’s girl-power energy was in full-force when Tiny Horse took to the stage around 2:00 p.m., with a colourful and engaging set that got many people out of their lawn chairs and dancing in front of the stage. The band, led by Ciara Roberts and Rae Corcoran (also of Needless Love Endorsement), has built a reputation as a solid musical duo, who’s catchy lyrics will have you humming their songs for days—if not weeks—after you’ve seen them perform.

With rain forecast for much of the day, the sun peeked from behind the clouds as Tiny Horse took to the stage. “We were a bit nervous when we left our house this morning… then we got in the car, and we were soaked, but that’s alright, because the sun came out, and we nailed it,” said Corcoran. “We’ve been looking forward to it for like four months, and we’ve obviously been practicing with the intent of coming here and we just tried to have a good time,” added Roberts. 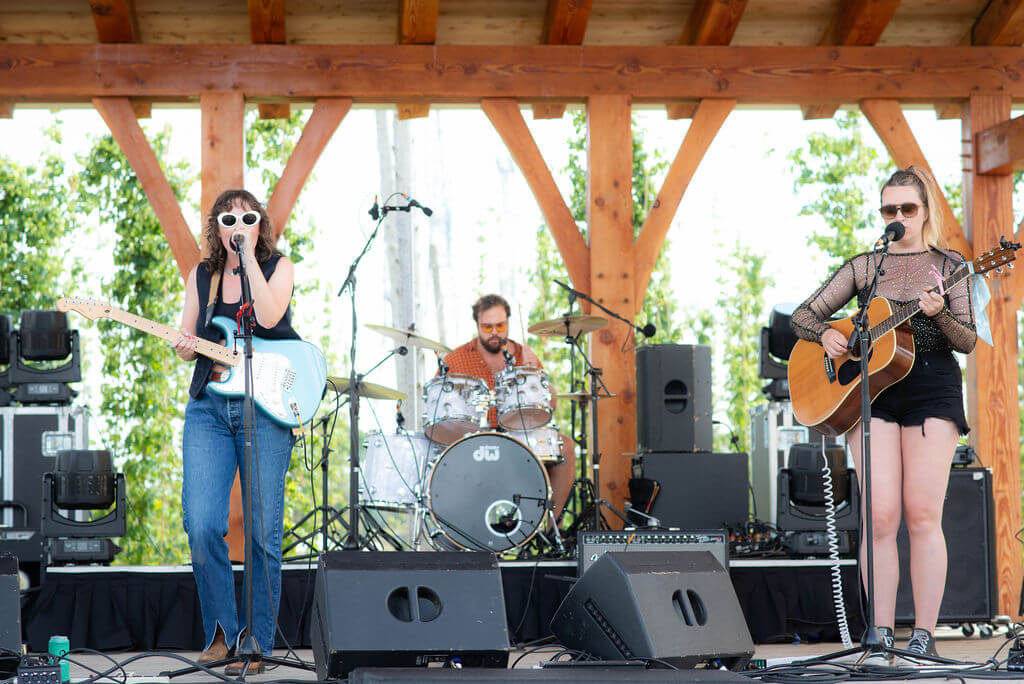 In their Back to the Farm debut, Roberts and Corcoran also unveiled a new lineup, with Julia Beatie and Harvey Dolphin joining on keyboard and drums respectively. “We knew we were going to be reaching a new crowd in Kingston who probably hadn’t heard us play [before]… and we wanted to come out with a big punch, so we asked our two most talented friends if they wanted to [join us],” said Roberts. Initially brought on specifically for the Back to the Farm performance, Beatie and Dolphin are now permanent members of Tiny Horse.

While Tiny Horse has always been an enjoyable pair to watch, Roberts’ and Corcoran’s musicianship was elevated by the support of a full band, making them a notable group to watch, especially as they prepare to release a new four-song EP this fall. While an official release date has not yet been set, the band is confirmed to play The Mansion in Kingston on September 15, alongside Eamon McGrath. 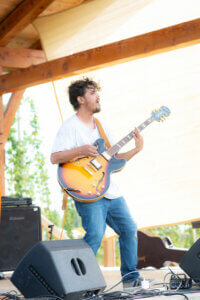 Following Tiny Horse, KaKaow (Ricky Brant) kept the tunes pumping with his unique one-man psychedelic/funk set. Brant energized attendees with his highly animated instrumental performance. “I feel like everybody here really dug the vibe and it’s something absolutely different,” noted Brant, whose style departs from the typical Back to the Farm musical fare. “I was the wild card here, and it came through, and really showed… how diverse Kingston’s music scene can be. The love I felt was absolutely palpable.” KaKaow’s new record Earth to Station will be unveiled at a special album release party on September 23 at The Toucan.

Also on tap Sunday, was a performance by Kingston mega-group The Gertrudes, whose sing-along folk songs prompted dancing and crowd participation. “There’s a lot of people here! For a band that hasn’t been playing much lately, this is pretty exciting for us. We loved it, it was super fun,” remarked lead singer Greg Tilson. Their 45-minute set allowed The Gertrudes plenty of time to perform a selection of songs from their latest album Emergency to Emergency, which was released last November.

“Like everybody, we’ve been writing tons of songs over the pandemic, [we’re] still trying it out… We’ve haven’t really had a chance to play it that much, so we’re still kind of introducing the songs to people.” As for what The Gertrudes have coming up next, Tilson noted a big show set for next month. “A really big deal for us is playing at the world-renowned Isabel Bader Centre for the Performing Arts, that’s on September 23. It will be a treat just to fill the stage with guest musicians, horn players, flautists, and strings.”

Rounding out the afternoon’s local offerings was the surprise return of Reuben de Groot’s Rocket Surgery, a Kingston musical institution prior to de Groot’s departure to the west coast, who remarked from stage that it had been three-and-a-half years since their last performance. Rocket Surgery brought many attendees to their feet, and the front-of-stage crowd swelled larger for Miss Emily’s set which followed. 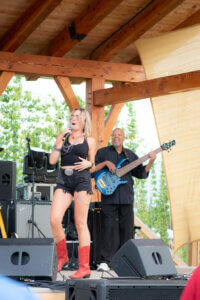 Anticipation for Miss Emily’s return to the festival stage was high this year following her Juno Award nomination and recent Maple Blues Awards win for Female Vocalist of the Year. Emily excitedly announced her new album release show on October 2 at the Kingston Grand Theatre as dancers bopped along to the rhythm of her blues band.

Both acts were clearly a hit among festival attendees, with people dancing and enjoying the merriment of lively music by these tremendously talented local entertainers well into the evening.